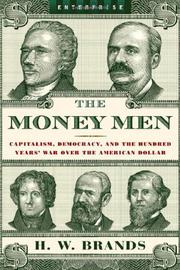 Capitalism, Democracy, and the Hundred Years’ War Over the American Dollar

A lively and accessible history of a once-dominant issue in American life.

The Federal Reserve Act of 1913, which governs US monetary policy, was a compromise solution to a long and fierce brawl between capitalists and democrats over money—what it is, who should control it and how it shapes the economy. And what a brawl it was. Brands (History/Univ. of Texas; Andrew Jackson, 2005, etc.) recounts the machinations of figures from Alexander Hamilton and Nicholas Biddle to William Jennings Bryan and J.P. Morgan as they engaged in a wildly careening struggle marked by much oratory, some bribery and motives ranging from noble to nefarious. Beginning with Hamilton’s arguments for a national bank, Brands shows how the two camps developed. The capitalists argued for the stability and unity conferred by a centralized, well-managed money supply, while the democrats feared a strong central government as a threat to democracy. Tracing the shifting debate as the nation grew into an industrial power, Brands brings these men to life. We see one-third of the members of Congress profiting as charter shareholders of Hamilton’s first Bank of the United States; Philadelphia mobs rioting against the second Bank of the United States, with Biddle, its director, barricading himself at home; and Jay Gould and James Fisk fleeing the financial district for their lives (to an opera house) after cornering the gold market and precipitating Black Friday, in 1869. Hounded but also feted—100,000 people watched Fisk’s New York City funeral procession in 1872, while a brass band played—the 19th-century financiers played key roles in the rise of the rail and steel industries, battled Theodore Roosevelt and other progressives and saw their heyday pass (even as J.P. Morgan died) in 1913, when President Wilson convinced Congress to create 12 privately capitalized Federal Reserve Banks with government oversight.

Right on the money.