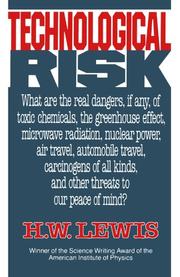 A first-rate text on the art and science of risk measurement and management by a physicist (Univ. of Cal. at Santa Barbara) who flies planes and who has chaired many a government committee looking at risks. Moreover, who can write. Who can explain the mathematics painlessly. Who is, at times, outrageously funny. In short, who offers a breath of fresh air to blow at the artful dodgers who pooh-pooh any risk and the Forever Fearful who would avoid risk at all costs. Lewis's coverage is broad: from the absurdity of Cutty Sark paying a king's ransom to Lloyd's of London to insure against having to pay a prize to anyone who might catch the Loch Ness monster, to airline and highway safety and fossil fuel and nuclear waste disposal, to current controversies on food additives, chemicals, nonionizing radiation (for example, microwaves), global warming, and nuclear winter. Lewis minces no words on vested interests and real versus imagined risks. On highway safety: ""The percentage of departed motorcyclists who have been drinking is higher still."" On the lack of independent nuclear review bodies: ""The most plausible explanation for the uncoordinated complexity of the nuclear regulatory system is that, deep down in their hearts, many participants don't believe that a major damaging accident is possible. They are wrong."" On nuclear waste disposal: ""It is embarrassingly easy to solve the technical problems, yet impossible to solve the political ones."" And on and on, with comments on human error, arrogance, and complacency on the one hand, alternating with worst-ease thinking and a counterproductive conservatism on the other. Throughout, Lewis demonstrates the importance of quantifying risk by using the best data and methods available, as well as indicating (as a refrain) where ""more research is needed."" Admittedly, this is hard, given our cultural (and media) biases to see things as either black or white, where the costs/benefits of technology are given short shrift, and where experts disagree. Hard, yes, but three cheers to Lewis for leading us down the straight and narrow.