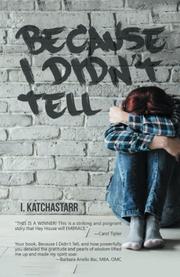 BECAUSE I DIDN’T TELL

A debut memoir recounts a woman’s escape and recovery from a harrowing marriage.

In 1981, at the age of 19, Katchastarr was raped by her ex-boyfriend Phidelopé (a fictional name) after she invited him over for a friendly dinner. Instead of reporting the rape to the police, the author simply went to work, more concerned about losing her job than she was about bringing Phidelopé to justice: “I kept to myself those following weeks, healing my aching body; tending to self-care; installing a bolt lock, chain lock, and new key lock to the door of my apartment; and praying I would never see him again.” Katchastarr was not so lucky. When he learned that she was pregnant, Phidelopé asked her to marry him—at gunpoint. He warned that if she tried to report the rape, abort the child, or live her life without him, he would kill her and her family. She went along with it, marrying and moving in with him, hoping to somehow find a way to appease his anger and build a normal, stable life. Phidelopé continued to be violent and sexually abusive to the author and the couple’s two daughters, to the point where Katchastarr finally worked up the courage to leave. Unfortunately, the damage done by her husband would haunt her long after they were no longer under the same roof. With a grim sense of self-reflection, Katchastarr (a pseudonym) documents her years of abuse in simple but powerful prose: “I really thought he was going to kill my dad as he stood over him, proudly pointing the gun at him and demanding that he and my mother mind their own business and insisting that they stay out of our lives forever.” The author’s decision to italicize Phidelopé’s pronouns doesn’t work quite the way she wants it to (they read as emphatic rather than othering), and a bit more background information for the book’s key characters would have been helpful for context. But in general, Katchastarr’s story is affecting and engaging, and readers should be deeply interested in how she managed to pull herself out of a situation that can only be described as nightmarish.

A compelling and upsetting account of an abusive relationship.

A PIECE OF CAKE
by Cupcake Brown
Indie

FINDING ME
by Sarah Wheeler
Indie

OUT OF SILENCE
by Ruby Monroe
Indie