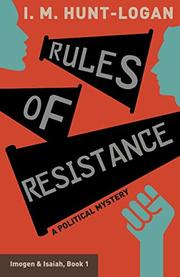 From the Imogen & Isaiah series, volume 1

The murder of a “third-rate hack of a political consultant” triggers the plot of this debut novel.

Isaiah Whitman, a political activist, recalls the events that led him to a holding room at the Modesto, California, police department. He’s awaiting questioning regarding the death of Corey Strutsky, who was found shot in Whitman’s office. Whitman, who was once known as one of Silicon Valley’s “Rising Stars,” sold his business a while ago. Donald Trump’s election deeply concerned him and his twin sister, causing them to seek out “volunteer opportunities, and a path back to the nation we thought we knew.” They focused their attention on a California congressional race between Republican, white evangelical Mike Reed, and Latina community activist Sylvia Delgado, a Democrat. But they weren’t satisfied with simply making phone calls for Delgado. Whitman, a biracial man who’s long been “passing” for white, hatched an elaborate plot to pose as a supporter of Reed. He formed a political-action committee and targeted white, working-class voters who once voted for Barack Obama but swung to Trump. However, he didn’t want to win them over to Reed’s side; instead, he used deliberately racist rhetoric in order to horrify them into abandoning their Republican-voting ways. He hired Strutsky as a consultant who would “take messaging where others fear to tread.” But was Whitman using Strutsky, or was Strutsky using him? Although Hunt-Logan’s novel is billed as a “political mystery,” it reads more like an anti-Trump polemic—complete with citations to support arguments and data points. It may effectively serve as a call-to-action to non-voters who sat out the 2016 election; one character, for example, “excoriated friends who had told her they weren’t volunteering, as they ‘just weren’t that excited about Hillary.’ She said, ‘I hope they’re excited now.’ ” Still, many readers may find that the book displays more passion than it does nuance. Still, Hunt-Logan’s message is keenly felt, clearly urging readers to get politically engaged in the upcoming midterms—and beyond.

A passionate and timely political tale that will appeal to the anti-Trump choir but likely won’t create many converts.