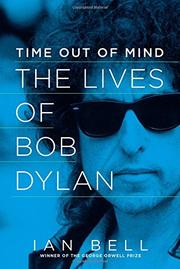 TIME OUT OF MIND

The Lives of Bob Dylan

The second volume of the Scottish journalist’s massive life of the astonishing performer and songwriter who, though now 73, continues to puzzle, amaze and perturb in equal measure.

Few celebrities in any era have held the limelight for so long as Dylan—or endured the indignities of the endless Google searches for the antecedents of his lyrics. Recognizing he has a virtually impossible task, Bell (Once Upon a Time: The Lives of Bob Dylan, 2013, etc.) chooses his focuses carefully. He writes in great detail about Dylan’s music, his touring (not all of it—that would be impossible), his evolving multiple selves and his ability to do just about exactly what he wants to all the time. This means that he has been able to make movies (usually bad), have exhibits of his artwork, play anywhere he wants to with whomever he wants (from the Grateful Dead to Paul Simon), say what he wants, have a satellite radio show (which the author praises), fail to show up for awards, sell underwear and present enough contradictory faces to the world to make Janus blush. The author is hard on just about all of Dylan’s critics (Greil Marcus, for example), except, of course, himself and novelist Jonathan Lethem, whose Rolling Stone interview with Dylan the author quotes favorably. Bell assails those who accuse Dylan of plagiarism, arguing several times that Dylan may borrow, but he also has to craft it all into art. (He does back off on a set of paintings that Dylan patently copied.) Bell writes little about Dylan’s love life and children, saying nothing at all, for example, about son Jakob’s double Grammys in 1997. The author excels at rumination, which he does on nearly every page.

Bell often succeeds in freezing time, permitting us glimpses of one of the multiple Dylans creating art in one of his multiverses.