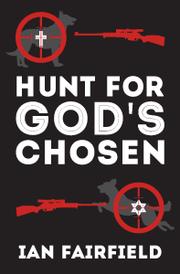 The action in this novel was apparently “foretold” in the secret Dead Sea Scroll No. 973, discovered by a pair of Israeli and Egyptian archaeologists in 1955. The scroll predicted that the tribes of Jacob and Esau would be reunited and that peace would return to the Middle East by the joining of the Chosen—a man and woman, each with distinctive birthmarks, who would be married in Jerusalem. The Chosen’s Protectors are Ari and Sarah, who team up with their attack dog, Rock, in a commando team called Rock ONE. An evil Iranian man named Saeed, the agent of Satan, threatens the Chosen and their Protectors. The novel’s wild card is an Israeli man called Yoman, who’s been guided by visions from God as he develops a plan to protect the Chosen and defeat Saeed: “My role is to instruct and equip you, but even I cannot fire a single shot to protect the Chosen,” Yoman explains. The bulk of the novel details the training of the Chosen and Protectors, and Fairfield liberally weaves in budding romances and brutal violence. With the end result already preordained, readers will find few surprises. Saeed is cartoonishly evil; his first words are, “Don’t worry. I am not going to kill you until you see me perform my surgical skills on your dog.” Things are in black and white in this novel, from the faceless, brutal terrorists to the orphaned heroes, and the dialogue reflects that: “The first objective is protecting the Chosen and getting them to Jerusalem to be married….Our second priority is to kill those bastards and any other Muslim terrorist who dares to challenge Rock ONE.” Fairfield interviewed several veterans for the book, and his research is obvious, as he overlays the story with a great deal of technical detail regarding military hardware. As with most action movies, readers will enjoy the momentum of Fairfield’s thriller as long as they’re not seeking reasoned global perspective.

A frantic but predictable foray into the war on terrorism.