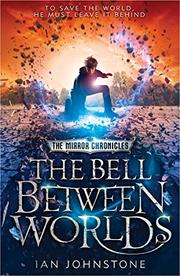 THE BELL BETWEEN WORLDS

From the Mirror Chronicles series, volume 1

A preteen with a hidden heritage runs from slavering Ghorhund and into the arms of his destiny when a huge bell that few can hear summons him to a parallel world.

Urged on by mysterious allies and hotly pursued by a giant black dog, Sylas is transported from a modern slum to another realm where the land looks the same but the people have a different history and practice four different kinds of magic. There, he falls in with the nearly exterminated adherents of the Fourth Way, which cooperates with nature rather than forcibly altering it like the other three, and becomes the object of a massive hunt by legions of bestial creatures made by Thoth, last and foulest of the ruling Priests of Souls. Why? Because according to an oblique prophecy, if Sylas can find his Glimmer, his other-world counterpart, he may reunite the two sundered planes. Along with folding in missing parents, coded writings, giant eagles and other comfortably familiar elements, Johnstone rarely breaks from a single storyline in this opener for (inevitably) a planned trilogy. Moreover, with the exception of one character playing a double game, he neatly divides the large supporting cast between warm, loyal, charismatic good guys and malformed, malign baddies. Stay tuned.

Tailor-made for readers who prefer their coming-of-age fantasies thick, straightforward of plot, and unencumbered by complications or moral conundrums.