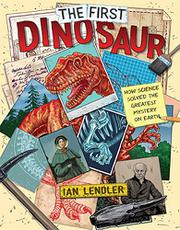 How Science Solved the Greatest Mystery on Earth

Lendler spins his account of how the awesome age and significance of fossils came to be understood into a grand yarn that begins 168 million years ago. He fast-forwards to 1676 and the first recorded fossil fragment of what was later named Megalosaurus and builds on the premise of “The Blind Men and the Elephant” to trace the ensuing, incremental accretion of stunning evidence over the next two centuries that the Earth is far older than the Bible seems to suggest and was once populated by creatures that no longer exist. It’s a story that abounds in smart, colorful characters including Mary Anning, Richard Owen (a brilliant scholar but “a horrible human being”), and Gideon Mantell, “a dude who really, really loved fossils.” Along the way the author fills readers in on coprolites (“the proof was in the pooing”), highlights the importance of recording discoveries, and explains how the tentative suggestion that certain fossils might have come from members of the “Lizard Tribe” morphed into the settled concept of “dinosaur.” Though he tells a Eurocentric tale, the author incorporates references to sexism and class preconceptions into his picture of scientific progress. Butzer’s illustrations add decorative and, sometimes, comical notes to sheaves of side notes, quotations, charts, maps, and period portraits and images.

An outstanding case study in how science is actually done: funny, nuanced, and perceptive.