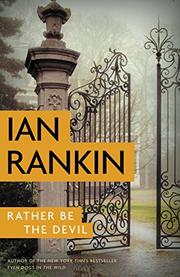 RATHER BE THE DEVIL

A rogue cop who won’t stay retired has even less incentive to follow the rules when an old murder leads to a new crime.

It’s no wonder that John Rebus can’t let go of a case, since he’s only partly enjoying his forced retirement. Having dinner at Edinburgh's old Caledonian Hotel, he recalls the 1978 murder of Maria Turquand that took place there; thinking about the cold case distracts him from ominous signs that his past disregard for his own health is catching up with him. So he asks his old friend and former colleague DI Siobhan Clarke if she can smuggle him the case files even though she’s in the thick of investigating the assault of a rising star in local organized crime. Malcolm Fox, recently promoted to the glory of the centralized Scottish Crime Campus, is called back to Edinburgh to be eyes and ears on the assault case, causing additional tension with Siobhan, who, they both know, was equally qualified for the promotion. Then Robert Chatham, the ex-detective who’d handled the Turquand case, is fished out of the harbor—and it wasn’t suicide. Rebus, who’d talked to Chatham shortly before he died, insinuates himself into the investigation of the latest murder and its possible connection to a money-laundering operation, an attempt to blackmail Fox, a large sum of missing cash, an equally missing tycoon, and the overshadowing presence of a veteran crime lord. The intertwining plots and relationships will be easier going for readers well-versed in the Rebus rubric, but newcomers will still be able to follow and appreciate the series’ finely crafted new entry.

If the word "dour" hadn’t already been in the English vocabulary, it would have had to be invented for Rankin (Even Dogs in the Wild, 2015, etc.) and his enduring detective. Luckily, the author is as tireless in delivering the goods as his creation is in solving tough cases.