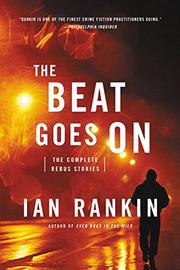 THE BEAT GOES ON

This cross section of Rebus’ career includes a month-by-month account of his detective work, starting with “Playback,” a case that everyone but our hero considers open-and-shut. It’s followed by a tale of a homeless man providing Rebus with a valuable clue in “Being Frank”; a vision of Jesus that helps solve a murder in “Seeing Things”; an assist from Shakespeare in "A Good Hanging”; and the cycle’s final entry, in which an ex-con finds his own kind of peace at the year’s end in “Auld Lang Syne.” Christmas brings its offbeat crimes, too. "No Sanity Claus” shows how useful a holiday outfit can be for a small-time crook. In “St. Nicked,” a Yuletide heist takes an unexpected turn. And Rebus finds himself in a showdown at the Festival of Santas in “Penalty Claus.” In other previously published stories, the detective’s keen ear cracks a case in "Talk Show,” and his skill with crossword puzzles comes to the fore in “Trip Trap.” Rebus, generally a notorious rule flouter, is unusually conscientious in "Facing the Music.” The novella, Death Is Not the End, reunites Rebus with a childhood friend and an old flame. In "The Very Last Drop,” the recently retired Rebus takes on a ghost in a brewery. The first of the two new stories, "The Passenger,” concerns a woman who bought a one-way ticket on a solitary holiday, and the second shows the perennially hard-drinking Rebus running true to form when he’s up against “A Three-Pint Problem.”

Rankin’s (Saints of the Shadow Bible, 2014, etc.) canny cop is as gray and dour as his Edinburgh beat, but he’s in fine form in these clever, occasionally touching, and often wryly funny vignettes.