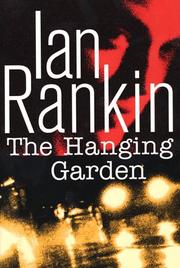 Staying on top of two complex investigations is tough enough, but what really has Inspector John Rebus up the wall is staying on the wagon. Here’s Edinburgh about to be become the scene of an all-out gang war, and there’s Rebus, the born-again teetotaler, doing what he can to stop it. Which at first isn’t much. Nor are the local thugs getting his full attention, since a new case has him running around in unproductive circles (while thinking what a power of good a wee dram might do for his morale). Rebus is investigating one Joseph Lintz, who may or may not be Josef Linzstek—a notorious Nazi war criminal who, as an SS lieutenant in 1941, wiped out an entire French village of 700 men, women, and children. And such a benign, unassuming little man this Lintz seems to be. Suddenly, unexpectedly, it turns up that he has connections to Tommy Telford, local mob chieftain. And Tommy, in his turn, has begun to demonstrate connections of a distinctly multinational flavor. Before you can say drugs and “prossies,” Rebus’s patch is awash in entrepreneurial emissaries from the Yakuza and the Chechens (Japanese and Russian mafia). Add to all this the woe and worry of a hit-and-run that fells his beloved daughter. Accident? Or is it gangspeak for —back off, Rebus—? Once again, action that’s relentlessly slam-bang, plotting that’s labyrinthine. Rebus, a puzzle to himself and an enigma to everyone else—especially that array of interesting ladies who’ve been drawn to him over the course of nine outings (Black and Blue, 1997, etc.)—remains one of the most charismatic heroes in contemporary crime fiction.