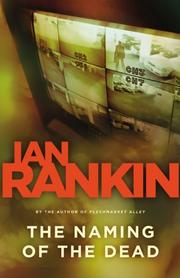 THE NAMING OF THE DEAD

DI John Rebus takes on the establishment, terrorists, headline tragedies and the aftermath of his brother’s death.

When political nabobs from global hot spots descend on Edinburgh for a well-publicized conference, John Rebus is sent packing. An iconoclastic police officer is not needed to guard the dignitaries, thanks very much. But when Labour MP Ben Webster, right-hand man to the Minister of International Development, falls to his death from the castle battlements on the eve of the conference, Rebus is called to look into the matter. Commander Steelforth, in charge of G8 security, tries to stifle him, insisting that Webster’s death was a suicide, but Rebus disagrees. In untangling the matter, he lands smack in the bailiwick of his nemesis, Big Ger Cafferty. Wily though Cafferty may be, Rebus outplays him. Sadly, DS Siobhan Clarke is less wary, and in exchange for information about goings-on at Clootie Well that tie into other sordid murders, she puts herself in Cafferty’s debt. Rebus must fend off important industrialists and banquet tables full of politicos (including Councillor Gareth Tench, who’s keen to keep certain secrets hidden, and himself alive). And he must deal with them while terrorists are bombing the London underground stations and bus lines.

The world would be better off if Rebus (Fleshmarket Alley, 2005, etc.) attended the peace summits instead of getting bogged down with the usual posturing officeholders and violent anarchists.