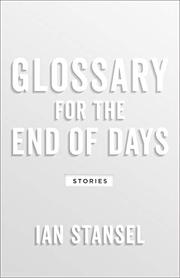 GLOSSARY FOR THE END OF DAYS

A collection of stories in search of an America that resists road mapping.

In nine stories and two short “interludes,” Stansel presents protagonists from all over the country in search of their identities (from sexual orientation to musical category), attempting to come to terms with mortality (their own and others), trying to find meaning and order in a world of chance and chaos. Wherever they go, they find themselves—and they generally find themselves adrift.  But, as one of the narrators advises, “The world tells us things if only we bother to hear it.” With story formats ranging from question-and-answer to the alphabetical glossary of the title story, the centerpiece of the collection is “The Caller,” based around a radio call-in show. The protagonist, Max, concocts a tale to share on Voices for the Lost, a program about people who have disappeared in the Mexican drug wars, saying his brother disappeared near Juarez. He did lose his brother to drug violence, though not to a Mexican drug cartel, and he invents the story to provide a connection with others on the program, a connection that can offer some relief from his aimless torpor, “a sad amazement at still being alive.” Inevitably, though, connection leads to consequences beyond his control. Elsewhere, the thematic ambition turns heavier handed. In “North out of Houston,” a family faces a metaphysical crisis as they're stalled on the highway while trying to evacuate ahead of a tropical storm. Mother, father, and son must each confront and attempt to resolve some issue related to sexuality amid a storm that is plainly metaphorical as well as natural. There is just too much symbolic baggage for a single story to carry.  In “Modern Sounds in Country and Western,” a Brooklyn band’s progression from indie to alt-country results in a breakthrough hit and a terrorist attack. There’s a lot going on in these stories and a lot at stake, but the philosophical weight is sometimes too much for the slighter among them to bear.

This is a writer who thinks hard and deep about the country that forges his fiction.