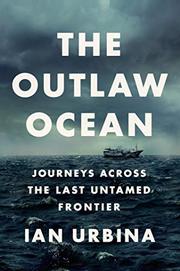 Journeys Across the Last Untamed Frontier

Early on, Pulitzer Prize and George Polk Award winner Urbina (Life's Little Annoyances: True Tales of People Who Just Can't Take It Anymore, 2005) writes that the stories he turned up while roaming from port to port “felt less like journalism than an attention deficit disorder,” so bewildering and untidy did they seem, so without unalloyed heroes and villains. One figure in the narrative, for instance, is a law-trained, poetry-writing sailor whose job is to sneak into ports where ships have been impounded and, on behalf of their owners, steal those ships away; the work is dangerous and utterly demanding. “He struck me as an older Tintin,” writes the author. The good guys in the story are beleaguered, outnumbered, and often outmaneuvered. As Urbina writes of Palau’s efforts to halt maritime poaching, a former captain of an interdicted pirate ship arrested in 2016 was back as an ordinary deckhand six months later, making the effort “more myth of Sisyphus than David and Goliath.” If there are villains in the story, they are perhaps the unnamed owners of fishing fleets that put out to sea for long periods of time, for they are inspected and policed only in port. Urbina engagingly chronicles his travels from one trouble spot to another: oil rigs erected on continental shelves, just outside the territorial zones of neighboring nations and subject to little governance; pirate-rich Somalia, where he became a persona non grata; and Djibouti, one of the places where ship owners—in this case of a Thai fleet—“shop around for the most lax registries with the lowest prices and fewest regulations.” Urbina’s book ranks alongside those by Mark Bowden and Sebastian Junger, fraught with peril and laced with beer, the smell of sea air, and constant bouts of gaming an inept system.

A swift-moving, often surprising account of the dangers that face sailors and nations alike on the lawless tide.