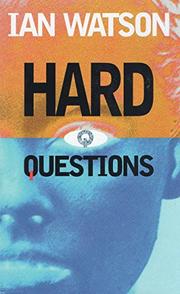 Contemporary science fiction/thriller involving computers and multiple realities, from the prolific Britisher (The Coming of Vertumnus, 1994, etc.). Cambridge University computer expert Clare Conway and psychologist Jack Fox will attend the Hard Questions symposium on artificial intelligence in Tucson—but a lurid article about Clare in a sleazy tabloid has alerted charismatic anti- computer cult leader Gabriel Soul and his promises of immortality through sexual ecstasy. The QX corporation of California is developing a quantum computer—it will operate in parallel universes—comparable, Clare thinks, to the human brain. Then Soul's murderous cultists snatch Clare; interrogated and threatened by Soul, she realizes that the first quantum computer must become self-aware. More, the personalities of the dead can be stored in the empty parallel universes where the computer operates! The US government assaults Soul's hideout and rescues Clare, though Soul himself escapes. But then a QX employee steals a prototype quantum computer, hijacking Clare and Jack in the process. And when Soul shows up, Clare powers up the computer, which becomes aware—and reality switches tracks. A hardworking tale, packed with incident, but undermined by Watson's usual anonymous characters, and computer logic that's more mushy than fuzzy.