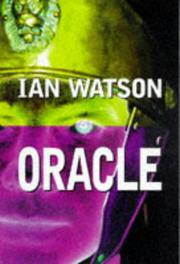 Another contemporary sf thriller from Watson (Hard Questions, p. 1485, etc.). The British secret services are exploiting the ``surreal numbers'' theories of physics genius Robin Garland (he's so unstable that he even has a personal shrink) to build Oracle, a machine that can view the future and so anticipate terrorist attacks and other threats to the state. But in its first test Oracle somehow snatches up a Roman centurion, Marcus Appius Silvanus, from a.d. 70. Tom Ryan, a former aspirant to the priesthood who speaks Latin, and his sister Mary shelter Marcus and slowly become convinced he's genuine. Then complications ensue: An old IRA boyfriend tries to manipulate Mary; muckraking journalist Barney Barber discovers Marcus's existence and sells the story to the tabloid press; and a feud between M15 and M16 reaches the boiling point. Eventually, Oracle previews the Queen's assassination in Belgium by the IRA one week in the future. Tom, Mary, and Marcus are captured by the IRA; British Intelligence pursues; and a storm-induced power discharge hurls somebody back to a.d. 70. Unbalanced—with a promising scenario and intriguing developments that degenerate into a long, stultifying chase—and populated by a largely anonymous and uninvolving cast.