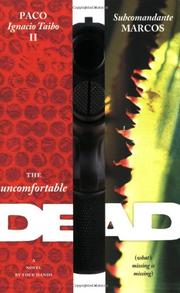 A Novel by Four Hands

The pair alternate chapters and pursue individual storylines that more or less converge at the end with the bad guy’s apprehension. Marcos follows the mission of 61-year-old Zapatista warrior Elías Contreras, sent by “El Sup”—Marcos writing about himself in the third person—into the “Monster” (Mexico City) to “pick up city ways.” Elías’s folksy, plainspoken narrative conveys the Zapatistas’ political philosophy; he offers brief biographies of some members of this group from the mountains of southeast Mexico made up largely of indigenous peoples and internationals. Taibo, for his part, brings back Héctor Balascoarán Shayne, the one-eyed Mexico City detective familiar from Taibo’s own mystery series (Return to the Same City, 1996, etc.), who has been receiving cryptic, paranoid messages on his answering machine from Jesús María Alvarado, a former buddy and political prisoner who was murdered in 1969. Is the caller Alvarado’s son, or his ghost? Whoever the voice belongs to, his messages implicate a corrupt character named Morales, a guerrilla-turned-official who disappeared during the Dirty War waged by previous governments (not that the current one is portrayed here as any better). Alerted by El Sup to the menace of Morales’s possible reappearance, Elías runs into Balascoarán in Mexico City, and the two set out in pursuit. The plot swiftly devolves into a detailed rehashing of insurgent maneuvering over the decades, topped by a veritable bludgeoning litany of “the bad and the evil,” according to authorities ranging from Don Quixote to Leonard Peltier.