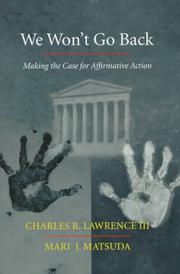 WE WON'T GO BACK

Making the Case for Affirmative Action

Responding to the current wave of affirmative-action backlash, two Georgetown law professors, each proud beneficiaries of the policy, stand as zealous advocates brooking no retreat. ``Our parents taught us that . . . the struggle to make a place at the table for ourselves was also the struggle to free the souls of those who would exclude us,'' write Lawrence (who is African-American) and Matsuda (Japanese-American) of their individual family legacies of political idealism and civil rights activism. The two authors—colleagues who are also married to each other—here form a tireless tag team to continue the relay. They alternate in writing 11 complementary essays that argue for muscular affirmative-action programs as the best tool to end the residual racial, gender, and economic subordination running through our society. As legal scholars, each is a leading proponent of an analytical perspective known as critical race theory, which documents how race, gender, and socioeconomic status shape our social and legal system, as well as our varied individual experiences navigating that system. In this book they acknowledge that overt bigotry has been rejected by our culture, but trace the unconscious prejudices that still prevail and structure access to real opportunity. What today's affirmative-action opponents want to push back, they argue, is the very effort to redistribute opportunity that is essential to dismantling institutionalized privilege of all kinds. The authors earnestly believe that attaining a freer and more just society will benefit everyone and justify the difficulty of a contentious transition. Extending the discussion beyond the combative rhetoric of reverse discrimination and racial preference, Matsuda and Lawrence have written a compassionate call to conscience, imprinted with their inspirational vision of American democracy and complex sense of a national community. But not everyone will buy into their communal vision of justice, which will remain anathema to unreconstructed rugged American individualists.