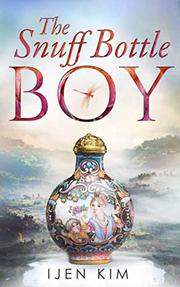 To the outside world, North Korea is a gray, choreographed nation, but even under such an oppressive regime, a surprising Chinese community exists within its borders. Mickey and his family are a part of this community, and while not an identity of privilege, it does afford advantages. Though frowned upon, sometimes even punished, there is tolerance for many to work as smugglers, bringing in outside luxuries while selling off pieces of the country’s history or, at the very least, convincing fakes. Mickey toils under a harsh mentor who trains him as an artist and a forger, but his passions lean harder toward the latter. Further igniting his imagination is a painted, antique copper snuff bottle, a family heirloom that has become a talisman to him. Its counterpart was spirited away by his grandmother Lily, who left North Korea for Moscow. The alluring mystery of Lily and the other bottle moves him to seek out greater freedoms as he studies art abroad. He also helps his brother Piggy in smuggling and faces the dangers of fools, assassins, and idealists. Kim’s debut reads as much like poetry as it does prose, Mickey’s travels and ebbing naiveté recalling the novels of Kerouac—though with far less whimsy and far greater consequence. Colorful digressions into his family’s history permeate but never distract from Mickey’s travels. Characters and their experiences, even outside of the protagonist’s plotline, matter. A foolish Western woman extolling the “hardiness” of North Korean socialism isn’t presented as just caricature, and a cruel rival from Mickey’s youth grows, unseen but believably, into a co-conspirator if not a friend. Most notably Mickey’s first love, Minsu, appears sporadically but offers a luckless story that could (and should!) be a novel unto itself, her hardships reminding readers that even Mickey’s journey is not as difficult as others’.

A rich, artistic novel reveals a culture obscured and unknown.