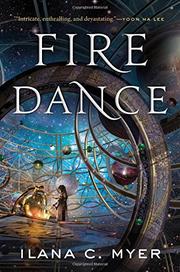 From the Harp and Ring Sequence series, volume 2

In the sequel to Last Song Before Night (2015), Myer pursues the theme that magic might cause more problems than it solves.

Lady Lin Amaristoth, now Court Poet of Eivar, travels to the kingdom of Kahishi, a powerful ally to Eivar experiencing a series of guerrilla attacks from the renegade Fire Dancers, in the hope that she might discover the mysterious magic aiding the rebels. Lin navigates a complex web of uncertain loyalties at the court of the Zahra while struggling to come to terms with the knowledge that she is dying from the spell that the poet Darien Aldemoor placed on her as part of their quest to reach the Otherworld. In the Academy of Poets, High Master Myre has died suddenly, and a newly appointed Archmaster, Elissan Diar, is conducting strange and dangerous rituals with a coterie of students, much to the dismay of last-year student Dorn Arrin, who eschews magic in favor of pursuing his music, and first-year student Julien Imara, ignored and disliked for being both female and plain. Will the fragile alignment of King and Academy that Lin worked so hard to establish survive her absence? Second volumes are tricky, and Book 1 was nearly self-contained; it was hard to tell where this series would or could go next. Myer quashes all concerns with this follow-up: Her world opens like a flower, revealing fresh landscapes both beautiful and dreadful. With a few villainous exceptions, her characters are convincingly nuanced blends of good and bad, forced to make terrible choices for personal survival or to save loved ones. The cliffhanger ending ensures that there is more magic, adventures, and angst to come.