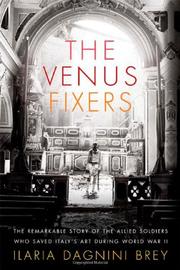 Near the end of World War II, a group of military officers in Italy—the “Venus Fixers”—struggled to save what they could in the rubble of great cities and to recover from the retreating Nazis the myriad artistic treasures they took with them.

In her debut, journalist and translator Brey narrates a story with a complex setting and context. Accordingly, she continually pauses to explain troop maneuvers and battles; Italian geography, history and politics; the biographies of her principals; the nature of the works being found, rescued or restored; and the techniques employed to shore up a collapsing building or repair a damaged fresco or damp manuscript. For the most part, the author succeeds in her multitasking, though there are times when the thick hedges of her prose need some additional pruning. When the Allies invaded Sicily in 1943, they intended to push the Germans out of Italy, a task that proved far more difficult and sanguinary than the war strategists had anticipated. Civilian losses were ruinous. Because the front moved slowly northward, the destruction—principally from bombing raids—was extensive. But as cities were liberated—in some cases, even before the liberation was complete—the Venus Fixers moved in to inventory, locate, assess and initiate salvage operations. With the support of President Roosevelt and the Allied military command, the Fixers moved swiftly to gain the trust and respect of the locals. In fact, the principal Fixer in Florence, Frederick Hartt, an American officer, earned from that city an honorary citizenship, and his ashes are now interred there.