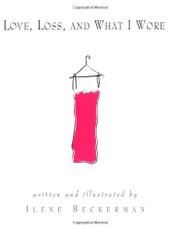 LOVE, LOSS, AND WHAT I WORE

Advertising executive Beckerman remembers things past not by way of biting into a madeleine but by way of the clothes she was wearing when she bit into it. And rather than a Proustian floodtide, her memories come in succinct images, narrated in an impersonally dry, flat tone that gives the same weight to her youthful excitement over wearing the ``pink, green and black iridescent metallic plaid taffeta gown'' her mother made as it gives to the death, years later, of her 18-month-old son. By contrast, Beckerman's colorful drawings of dresses, hairdos, even underclothes from the 1940s, '50s, '60s, and '70s have a delightful unschooled charm. While Beckerman's life has had its ups and downs, her story is mostly devoid of interest; but her wardrobe has always been enviableespecially that ``iridescent brocade Chinese-style dinner dress'' her first ex-husband urged her to buy because it showed off her pretty arms. You might want to look at the clothes and make up your own story as you go alongsort of like playing with Barbie. (First printing of 40,000; first serial to the New York Times Magazine)