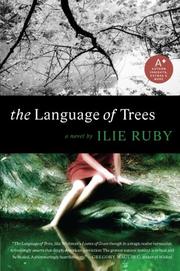 THE LANGUAGE OF TREES

In Ruby’s debut novel, set around Canandaigua, N.Y., a young man returns to his deceased parents’ lakeside cabin after a seven-year absence and becomes involved in the search for a missing woman and the truth about his past.

Teacher Grant Shongo, 33, returns to his parents’ cabin to pull himself together after his wife Susanna leaves him, claiming he has never fully committed to her. Susanna is not wrong. Grant is still haunted by memories of Echo, the sweetheart he has not seen for 15 years, since they made love and then broke up over a misunderstanding shortly before she left for college. Grant’s doctor father Ben was of Seneca Indian descent; when Grant befriends and heals a dog-wolf hybrid, the spiritual healing powers Grant inherited from Ben become obvious. Eventually Grant realizes his father was really the semi-mythical Indian chief Two Bears. But first Echo shows up to care for the ailing, elderly cousin who raised her in Canandaigua after she was orphaned. The love between Echo and Grant resurfaces, although both are frightened to express their true feelings. Meanwhile, 21-year-old Melanie Ellis has gone missing. One night when she was nine, Melanie, along with eight-year-old sister Maya and seven-year-old brother Luke, took Ben's canoe out on the lake without asking; a storm came and Luke drowned, although the sisters’ memories of the details of the event remain hazy. Soon after, Melanie’s mother and abusive father divorced. Maya is now in a mental hospital. Addicted to drugs and dangerous behavior, Melanie had been putting her life together before her disappearance, in love and raising a child with African-American Lion, a recovering addict from California. After Grant saves Lion when he goes off the wagon, he becomes involved in Grant’s search for Melanie, whom readers already know has been abducted by her father, who holds her in Two Bears’ Cave.

Native American spirits haunt the novel, but unfortunately so do too many coincidences to allow the reader to suspend belief.