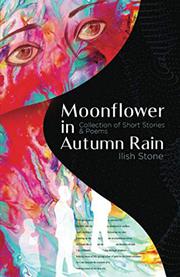 These short stories, poems, and a novella explore surreal landscapes of emotions and relationships.

The first four parts of this collection each contain a short story followed by three related poems. The final section features a novella and a single poem. A sense of surrealism and uncertain identity underlies these pieces, as in the opening tale, “The Antonym of Flower is Wind,” which begins with a dreamlike image: “The swan that sleeps on people’s bellybuttons.” It’s offered by a young woman called Lorelei, who fascinates the narrator, but he eventually realizes that “something was leaving” inside her, going somewhere he can’t follow. Over the years, some things remind him of Lorelei: the harmonica, fireflies. In the narrator’s mailbox is a letter from Lorelei telling him: “You’re over there, over in the real world. I’m not there….You’d never find me.” He remembers her saying she can’t ever be human, and “in some ways, you’re just like me.” The accompanying poems use associated imagery; in “No Longer Human,” for example, “the fireflies float / then no longer glow / … / So you, too, / so warm and loving, may no longer stay.” In another story, “A Silent Anemone,” a man claims to be from Venus, and the narrator (who pretends to be deaf but isn’t) can’t help believing him. In other tales, characters transform themselves, confront death and evanescence, and look for the real and unreal within the mundane. In his book, Stone (I’m a Duck With Alligator Fingers, 2018) writes in a captivating magical realist vein. His images are dreamy, too, and often melancholic: A girl who tries to sail her ship to the moon discovers that “even in the myth, the moon failed.” Romance, or at least the promise of it, underlies many of these stories, with the mysterious embodied by an attractive young woman. A dream girl isn’t the freshest trope, but it’s complicated by an aura of unease or alienation. At times, the author overrelies on cultural touchstones, especially songs, to establish taste and coolness credentials (including “Another World” by Kinoko Teikoku; “The Dandelion Girl” by Robert F. Young; and Dalí’s The Persistence of Memory).

Intriguing journeys through ambiguous states of being.