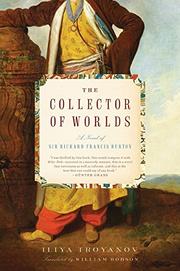 THE COLLECTOR OF WORLDS

by Iliya Troyanov and translated by William Hobson

The 19th-century explorer, lover, translator and spy comes to life in the pages of an epic novel.

Troyanov (Along the Ganges, 2005, etc.) begins in India with Sir Richard Francis Burton learning Hindustani and Gujarati, two of the some two-dozen languages he eventually mastered. Burton is at ease passing as a Hindu local, which is helpful to him because of his anthropological interests—and helpful to the British military because of his “reliable reports on the doings of the natives.” In India we also witness Burton’s entanglement with the exotic Kundalini, a courtesan who teaches him ways of love but whose status as a deity’s wife complicates personal relationships. The novel next skips to Arabia, where Burton disguises himself as Mirza Abdullah to undertake a hajj to Mecca. To add interest and complication, he decides to pass himself off both as a doctor (he’d dabbled in medicine for years) and as a dervish (because such dissembling “will afford him a certain licence…unusual behaviour will be forgiven”). Burton’s final adventure takes place in Africa, where he goes on a long and dangerous trek from Zanzibar to the oasis of Kazeh and thence to Lake Tanganyika. On this journey he’s accompanied by John Hanning Speke, a fellow Englishman whose approach to native culture is far different from Burton’s. Speke has nothing but contempt for the “savages” and is “constantly on the threshold of hatred” for indigenous cultures and for Burton himself. Throughout, Troyanov uses a complex narrative technique, incorporating letters and dialogue in play form.

An intriguing narrative foregrounds Burton’s multifaceted and complex personality, from his love of disguise and his intellectual interests to his sexual proclivities.