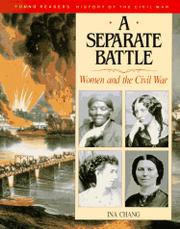 Women and the Civil War

In the ``Young Readers' History of the Civil War'' series, a survey of women's many roles, vividly illuminated with dozens of personal stories of both the famous and the obscure. Beginning with abolitionist Angelina GrimkÇ, who was born a wealthy South Carolinian but moved to Philadelphia because she abhorred slavery, Chang introduces several other prewar ``Voices for Freedom,'' both black and white, from North and South. Succeeding chapters discuss ``Supplying the Armies'' (not just with sewing skills but with organizational genius); doctors and nurses who had to endure male doctors' prejudices in addition to the appalling hospital conditions; clever and courageous spies and the many women, some never revealed, who posed as men to serve as soldiers; trials and sorrows on the home front, including taking on men's roles and coping with shortages (there were bread riots all over the South); and, finally, the aftermath, when Angelina GrimkÇ reappears to discover that she has half-black nephews, put them through college and graduate school, and declare that ``these young men...far exceed in talents any of my other GrimkÇ nephews.'' Archival photos and engravings, maps, broadsides, cartoons, and boxed treatment of special topics are all skillfully chosen to support the fascinating, well-organized text. This book is Chang's debut: a splendid achievement. Bibliography; index. (Nonfiction. 10-14)