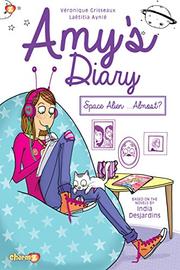 From the Amy's Diary series, volume 1

While her teen angst is universal, diarist Amy feels like she is from another world.

Fourteen-year-old Amy, who has a generous smattering of freckles and sprightly ginger hair, dutifully records many familiar teen trials and tribulations: crushes, unrelenting embarrassment, and social squabbles. Her best friend, Kat, dithers between ignoring her for a boy and demanding Amy’s full attention when her relationship falters. Amy is in a tenuous relationship with Nick, a cute skater boy with whom she likes to kiss but finds herself tongue-tied when they actually talk. Her father died five years ago; now Amy struggles less with grief and more with her mother’s beginning to date. While Amy’s problems may seem familiar, they are never explored with any real depth. Throughout her narrative, there is little personal growth; the only things that change with any regularity are her sartorial selections. Every time Amy finds herself in a difficult situation, she runs from it, wearing thin any awkward charm. Even her space-alien feelings seem flimsy and perfunctory. Told in a diary format alongside full-color comic panels, this graphic novel was originally published in French in 2015 as an adaptation of a novel published nearly a decade earlier; this version contains scenes that read off these days, such as an unfunny joke about hamster rape and an unnecessarily awkward moment surrounding a dropped tampon. Amy’s world seems to be a white, middle-class one.

Surely there are more nuanced female characters than this.