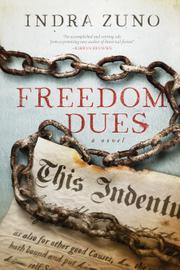 The destinies of two indentured servants from Europe converge in the American colonies in this debut novel.

Malvina “Mallie” Ambrose spends July 1729 alone and scared in London’s Newgate Prison. An orphan, she was raised by Elizabeth “Lizzie” Batt, a thief who used Mallie as a distraction while committing her crimes. When one of Lizzie’s schemes went wrong, both were arrested and landed in Newgate. After a brief trial, Mallie is sent to the American colonies with other convicts. Meanwhile, in the province of Ulster in Ireland, Blair Eakins faces an uncertain future. His father is dead and his community is impoverished with no viable opportunities for him or his brother, Ronald. After hearing about work in America, Blair reluctantly leaves his sweetheart, Janet Ferry, and embarks with his brother on a long and dangerous voyage to Pennsylvania. Mallie ends up in Maryland, where she is purchased by a landowner named Bradnox to work on his estate, Prosperity. In Pennsylvania, the Eakins brothers separate and Blair begins an indenture with a cordwainer named Jeffrey Craig. By 1736, a twist of fate brings Mallie and Blair together in the same home and they eventually fall in love. After Blair saves Mallie from abuse, he devises a desperate plan to find Ronald and secure their freedom, setting into motion a series of events that threaten to separate the lovers forever. Zuno’s novel is a splendid historical epic with complex characters and richly drawn settings. The nuanced, well-developed narrative spans nearly a decade as it follows Mallie’s and Blair’s journeys to America and the difficult circumstances of their lives as indentured servants. The author’s sturdy, workmanlike prose perfectly captures the joys and sorrows of the protagonists as they struggle to build new lives in America (“Livid, Blair watched the darkness swallow Ronald. He could not imagine ever talking to him again. At the same time, he knew he probably would never see his mother, uncle, or any other member of his family. He felt like a castaway”). Although the tale primarily centers on Mallie and Blair, the myriad supporting characters have equally memorable storylines, including Lucius Groom, a man who recognizes and nurtures Blair’s musical talents, and Ronald. Setting is a key component of the book and the narrative deftly moves from England and Ireland to Maryland and Pennsylvania.

An accomplished and stirring tale from a promising new author of historical fiction.