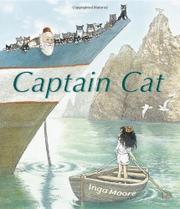 This quirky tale has something for everyone: an adventurous sea captain, a mysterious island, mounds of treasure, a spunky princess, handsome sailors, charming cats (who are also ruthless hunters), and a clever, if not entirely intentional, comeuppance for a band of greedy merchants.

The lengthy text covers a fair amount of time and distance in a conversational tone that suits the story’s origin as an “old Italian tale” (according to the flyleaf; there is no other source note). Captain Cat’s business sense, according to his colleagues, is sadly lacking, as he cheerfully trades goods of great value for his feline friends. Moreover, his urge to explore eventually sends him off in the opposite direction from the traditional trade routes. Ironically, he winds up on an island where his cats are more precious than gold—and where they are more than happy to settle down. Captain Cat, on the other hand, continues to sail, first back to his home port, where his wealth dazzles the other merchants, and then on across the open seas. Moore’s mixed-media illustrations have the appearance of pen and ink and watercolor. A preponderance of mostly muted blues, greens, browns and tans create convincing watery vistas and rocky beaches as well as a plethora of cheerful-looking, big-eyed cats.

Though it’s on the long side, Moore’s tale combines traditional themes and spritely illustrations to create a satisfying, offbeat adventure.