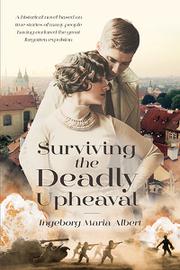 After the conclusion of World War II, a German Bohemian family is forced from its home in Czechoslovakia and beset by hardships in this debut novel.

During the war, invading German forces annexed Czech territories, causing considerable resentment against local German Bohemians and German Czechs. In 1945, the war is over, and following seven years of German occupation, the acrimony “had turned ugly, brutal, and violent.” Hans and Mattie Novak, two German Bohemians, fret anxiously over their increasingly precarious future and prepare for the worst-case scenario—a relocation, which would be daunting for them and their four kids. However, the decision is made for them when Hans is brutally beaten by local policemen and ordered to leave his beloved home immediately. Author Albert poignantly chronicles the harrowing plight of the Novaks, who attempt to cross through the forest into Austria and take temporary lodging at an American refugee camp. This refuge is short-lived, however, as the camp is ravaged by a typhus epidemic, and the disease nearly costs Mattie her life. The family finally makes their way to the home of Hans’ best friend, Heinrich. But Heinrich later savagely rapes and beats Mattie, which plunges her into a deep depression. In lucid, unflinching language, Albert ably captures the burdens of the Novaks’ exile over the course of the book. The author also affectingly limns the historical period in which they lived, as well as the ethnic divisions that roiled Czechoslovakia in the wake of the Second World War—and especially the hatred of a people that “wanted fierce revenge—cruel, violent revenge—and all with the blessing of President Beneš’ retribution decree.” Overall, Albert delivers a moving tale that’s emotionally authentic and historically astute.

A skillful and affecting combination of literary drama and historical research.