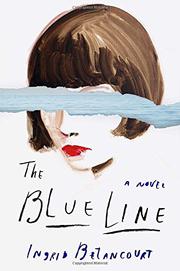 Erstwhile Colombian politician Betancourt (Until Death Do Us Part, 2002, etc.) tries her hand at a kind of watery magical realism in this debut novel.

Bad things happen to good people, and good things happen to bad people. That explains why someone like Juan Perón could have returned to power following disgrace and why the generals who ruled Argentina in the 1970s and '80s could have disappeared so many men and women who simply sought justice. Julia and Theo are caught up in events. As a very young girl, Julia had learned that she could see things unfolding through the eyes of others, a kind of clairvoyance accompanied by tremors and “an irrational feeling of panic.” Moreover, Julia has a touch of synesthesia, and for her, “happiness is blue,” as in the place where the blue line of the sky meets that of the ocean. That’s all well and good, but Julia doesn’t see far enough into her own future to see that life with Theo is going to be difficult: “He wasn’t handsome by any means,” writes Betancourt, with the head-scratchingly vague addendum, “but he had the appeal of young people who enjoy other people’s company.” Life with Theo is complicated in part because he’s got a wandering eye, in part because of the inquisitors who disapprove of the young couple’s generously liberal politics: “Say good-bye to your youth, asshole,” barks one. “When you come back you’ll feel a hundred years old.” Improbably, Julia and Theo make their way out of prison to the comfortable suburbs of America, where a different future unfolds. The best passages of Betancourt’s novel take place behind bars, which speaks to her own well-known captivity in the hands of Marxist guerrillas. Against this, Julia’s supernatural powers seem an unnecessary flourish, though clearly she’s useful to have on hand if trying to dodge oncoming cars or downward-hurtling planes.

The old problem of free will and predestination gets a good workout, but Betancourt’s novel is less satisfying than her 2010 memoir Even Silence Has an End.