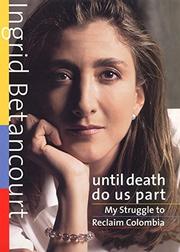 UNTIL DEATH DO US PART

My Struggle to Reclaim Colombia

A courageous Colombian senator, member of a politically active family, charts her course through the dangerous political waters of her troubled country.

Currently running for president of Colombia, Betancourt begins in December 1996, when she had an ominous meeting with an anonymous man who warned that her life was in imminent jeopardy because her aggressive anti-corruption agenda angered the nation’s druglords and their minions. Alarmed, Betancourt hurried home, gathered up her children, and whisked them off to New Zealand to stay with their father, from whom the author separated in 1990. We return to this meeting 180 pages later. In the interim, Betancourt takes us back to her somewhat privileged childhood in France, where her father served as a UNESCO official. Her parents separated when she was 14, but Betancourt admired them both for their rigorous political and personal rectitude. In the summer of 1986, she returned to Colombia to visit her mother, who worked to better the lives of homeless children, and decided to become a legislator. First, Betancourt helped her mother win a senate campaign; soon, she received an appointment in the ministry of education. She was and is horrified by the corruption and apathy in Colombia’s government. Describing a visit to a coastal village repeatedly leveled by storms, she asks, “What kind of democracy is it that lets its people die like this without any choice?” Throughout, Betancourt employs the present tense, which creates an affecting immediacy and compelling urgency. As we follow her triumphs and travails, including a trial on trumped-up ethics charges and a fortunate escape from an assassination attempt, we feel we are alongside her. But she is not always a tolerable companion. Her righteous indignation sometimes devolves into simple self-righteousness, and repeated accounts of her own ethical purity eventually grate rather than ingratiate.

By the end, the text has abandoned its disguise as a memoir and revealed its true identity as a rather conventional campaign autobiography.