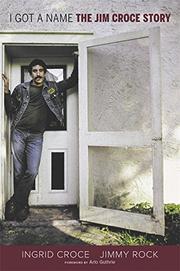 I GOT A NAME

Before he was tragically killed in a 1973 plane crash while on tour, Croce commanded the radio airwaves. In the early ’70s, hits like “Bad, Bad Leroy Brown," “Operator” and “Time in a Bottle” made the singer-songwriter appear like an overnight sensation. In reality, it took him many years of heartache and struggle to crack the top of the charts, and Ingrid was with him every step of the way, both as a musical collaborator and a devoted wife. The couple’s profound love for one another, first ignited when Jim was still in college and Ingrid was just 16, is infused into every one of these intimate pages. Her husband’s premature death was a nightmare to all who knew him and loved his music. For Ingrid, the tragedy actually began well before he ever climbed into that doomed airplane. At some point (which Ingrid traces to a horrific incident she experienced while on vacation), Jim began to change in ways that are almost as sad, frustrating and unfathomable as his untimely demise. She recounts the many betrayals and transgressions in a heartbreaking voice. This warts-and-all portrait paints Jim as a profoundly conflicted man who might have gotten his act together had he been given the time—but maybe not. For almost 40 years, fans curious about Jim have had to satisfy themselves with his wonderful songs, but now we have a more complete picture of the man behind the music.

A deeply candid look into the life and times of a talented artist.