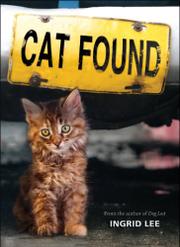 Lee's Dog Lost (2008) was a fictional account of one community’s fear-fueled drive to euthanize every pit bull in town. Following the same formula, here she tackles the problem of feral cats.

The town of Clydesdale has a big problem with stray cats, and citizens are demanding a solution. Billy Reddick has a problem, too. His father, Walter, mistreats both him and his mother and takes out his meanness on the town's homeless cats. When drunk, Walter even uses the cats for target practice. On Billy’s 11th birthday, Walter gives him an air rifle. “That thing will keep down the vermin.” But Billy has a secret—a stray cat he rescued and is hiding from his parents. When Billy discovers that the cat, Conga, is pregnant, he takes her to an abandoned building that is home to many feral cats but then becomes distraught when she goes missing. Will he find her before his father and other angry townsfolk kill her? The story is abundant with stereotypical characters and situations, right down to the oh-so-convenient climax. Though the ending is happy, at least for Conga, the graphic descriptions of animal cruelty, though honest and not gratuitous, may be upsetting to more sensitive readers.

The depth of Lee's concern for the animals is palpable, but her desire to deliver her message undercuts the effectiveness of her storytelling; for nuance, stick with Jerry Spinelli's Wringer (1997).