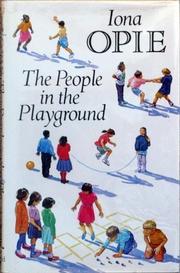 THE PEOPLE IN THE PLAYGROUND

Down in the schoolyard, as Opie (The Classic Fairy Tales, 1974, etc.) presents her impressions of exuberant playground life during the English equivalent of recess. At first, the junior-school scene in the town of Liss that Opie observes once a week for a period of years seems ``uncontrolled confusion,'' but gradually the author recognizes particular children, notes subtle patterns of play, and witnesses the ongoing exchange of ideas. Weather, she reports, matters less than playground geography or street activities (workmen of any kind always warrant attention), and gender signifies as well: Boys are more reckless, willing to fight or cry, while girls more often jump rope cooperatively or use conversation as a social activity. Fads come and go, structured games are few and far between, and disputation is ``the very spice of juvenile life.'' Jokes, especially dirty ones, are a frequent source of shared enjoyment, even when not fully understood, and are generally told with little self-consciousness or regard for others' sensitivities (in this group, Irish jokes resemble moron or Polish jokes). Opie's anecdotal re-creation will remind readers of their own past- -solitary children who hug the wall or pull up their socks; participants in fragile fantasies or spur-of-the-moment games; girls whispering intimacies; those who don't know what to do next but don't care; the sudden return to straight lines and formal deportment. Unlike the 1992 reissue of Opie's I Saw Esau, written with her late husband, Peter, this has no colorful Maurice Sendak illustrations interpreting the scene—but the text is nonetheless appealing for its heartening picture of children at play. (Two b&w plates)