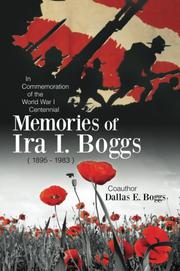 MEMORIES OF IRA I. BOGGS

A patriarch reminisces about the astonishing lifestyle changes observed during the last century in this debut autobiography.

Ira I. Boggs began his life in West Virginia. Born into a large clan of meager circumstances, he was educated in a one-room schoolhouse and helped till the family’s farmland: “In those days, children, women, and everybody worked with a hoe, an ax, or other tools—a horse and plow or an ox and plow.” Never shying away from hard work, he helped his family clear dense fields of lumber to add farmland. In 1917, he volunteered for the Army and fought in World War I. He avoided direct conflict but was exposed to the influenza pandemic. Upon his return, he worked in drilling, which took him to Texas and then California. The moderate California climate suited his fragile health, but he missed his home state. By the 1930s, he had returned to West Virginia to resettle near his family. He married, built his own home, and eventually had 11 children whom he provided for with a successful career in engineering. Over his lifetime, he witnessed a great change in technology, from planting fields barefoot to removing fuel from the earth. He survived epic clashes and even fought in a World War. In the end, it was the beauty and comforts of home that called him back to where he began. The book—written with debut author Dallas E. Boggs, Ira’s son—is a captivating glimpse of another time, offering perspectives and insights into an era when large families cultivated the land and were able to provide for themselves with a minimal amount of store-bought goods. Detailed descriptions of seasonal activities, such as putting up winter stores or rendering soap from pig carcasses, deftly document a fading knowledge and expertise. As a Boggs family chronicle, it is sure to be cherished by future generations of the clan. For mainstream audiences, the enjoyable book would improve through tightening the text and offering a more linear timeline. A few photographs are included, but the addition of a family genealogy and maps would aid readers.

A life intriguingly lived is engagingly recounted for today’s generation.