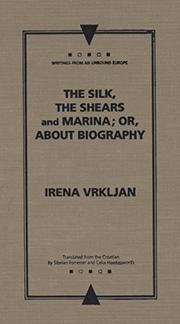 THE SILK, THE SHEARS, and MARINA

paper 0-8101-1604-9 A Croatian writer intriguingly probes the meaning of the past and its literary rendering through an examination of her own life and that of the Russian poet Marina Tsvetaeva. Vrkljan’s two works form a cohesive whole that stirs the reader with the heavy atmosphere of Belgrade, Zagreb, and Berlin. The two works also invite us to draw parallels between what Vrkljan has to say about autobiographical writing and our own country’s obsession with memoir literature. The two works contain both the literary representation of the past and the interpretation of what it means to truthfully present the (remembered) facts of one’s life while retaining the lyrical beauty of words. The Silk, the Shears recounts Vrkljan’s life as it spans the tumultuous political upheavals of the century—from her childhood in interwar Belgrade, to her adolescence in Zagreb, and her adult life as a writer in Zagreb and Berlin. For those familiar with the former Yugoslavia, Vrkljan’s writing is piercing, vividly capturing the feel of strained intimate personal relations and public life. Vrkljan writes with honesty and tenderness about her family and friends, about her development as a poet, her own and her mother’s unsatisfactory role as wife, her oppressive father, and the troubles of women in society. Marina picks up on these themes; it reads as an externalized autobiography, an imaginative leap of interpretation through a literary and spiritual soul mate. Reflecting on this connection, Vrkljan writes, “The biographies of others. Splinters in our body. As I pull them out, I pull out my own pictures from the deep, dark funnel.” With the spirit of Tsvetaeva, Vrkljan discusses how a poet can reconstruct the fabric of life. A noteworthy addition to the small body of contemporary Croatian writings available in English, and a lyrical study of the form and meaning of biography.