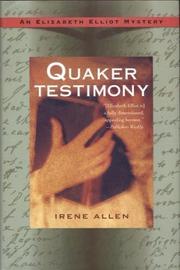 Third in a series set in Cambridge, Mass. (Quaker Witness, 1993, etc.), focusing on the sleuthing talents of widowed Elizabeth Elliot, sixtysomething Clerk of the area's Quaker congregation, called the Meeting. Hope and Sheldon Laughton, parents of six-year- old Cathy, are members, too—pacifist fanatics who withhold IRS taxes (used for purposes of war). As a result, they're due to be evicted from their handsome house, which is located next door to the home of Hope's childless sister Constance and her husband Titus. Elizabeth, making a supportive early morning call to the Laughtons on eviction day, finds Hope's body, shot to death, on her kitchen floor. As Detective Stewart Burnham bumbles his way along- -first arresting, then releasing Elizabeth—she does some quiet investigating on her own, learning of the unrequited passion of Otto Zimmer (also a Quaker) for the victim, and of Sheldon Laughton's recent conversion to Catholicism, undisclosed to the Meeting. Adding to Elizabeth's anxiety are the illness of her best friend Patience and the ambivalence of her own feelings about marriage to suitor Neil Stevenson. In the end, Elizabeth acts quickly to prevent another of Burnham's follies and produces the true, surprising culprit. More tract than fiction, with long passages detailing the history, philosophy, practices, and current struggles of the Quakers. Earnest Elizabeth is accorded near-reverential treatment; the puzzle gets short shrift. A curious work, then, that will leave the patient reader better informed, if only mildly entertained.