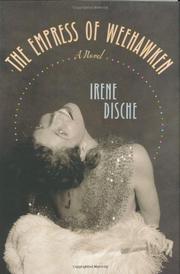 THE EMPRESS OF WEEHAWKEN

Three generations of unconventional women figure in this autobiographical novel from Dische (The Job, 2002, etc.).

The boundaries separating fiction and memoir are cheerfully trampled by Elisabeth Rother, the author’s real-life grandmother, whose narration—fictional, one assumes—maps a maze of recollections with plenty of wrong turns and cul-de-sacs (e.g., what “circumstances so demeaning” prompted granddaughter Irene to sell Elisabeth’s heirloom jewelry?). A staunch Catholic of aristocratic Rhineland stock, young Elisabeth marries Carl, a Jewish doctor who at her insistence converts to Christianity. As Hitler’s persecution of the Jews escalates from petty indignities to Final Solution, Carl finally heeds Elisabeth’s warnings to flee to America. She follows later with daughter Renate, a talented pianist. Once ensconced in New York, Renate struggles to become a physician, meeting husband-to-be Dische in the course of her chemistry studies. A brilliant scientist but a deeply dysfunctional human being, the Jewish Dische is barely tolerated by the Rothers and merely a marginal presence in the lives of Irene and Little Carl. His children’s destinies are controlled by Elisabeth and her faithful maid Liesel from the Rothers’ suburban New Jersey stronghold. (Renate, a coroner, parents sporadically and incompetently.) Little Carl is a child genius and bookish recluse. Irene grows up wild in the ’50s and ’60s, gets kicked out of school as often as her forebears and experiments with hippiedom while avoiding sex and drugs. At 17, she explores Europe, then moves on to Libya, where she’s stranded during Qaddafi’s coup, and to Kenya, where she bluffs her way into a job with Louis Leakey, who then shoehorns the high-school dropout into Harvard. Through it all, Elisabeth recounts the foibles and follies of her American descendants through befuddled but canny Old World eyes.

Rambling and disjointed, but enthralling.