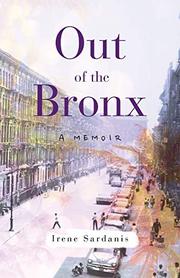 OUT OF THE BRONX

In this debut memoir, a woman recounts the turbulence of a childhood that left an emptiness she has spent most of a lifetime trying to fill.

The youngest of four children, Sardanis was born in the Bronx in 1933 to poorly matched Greek immigrant parents. Her mother, Maria, was a plain, illiterate peasant girl from a small village on the island of Lesbos. An arranged marriage to her brother’s friend Costa sent a terrified Maria off to New York, where she met her husband for the first time: “My mother valued family, religion, and her home. My father liked to drink, talk politics, and party with others.” He also spent most of what he earned on himself—fine clothes, “alcohol, and women.” They fought constantly. There was never enough money for rent, and food was sometimes scarce. When Sardanis was 5 years old, Costa left Maria and their four children, refusing to let them know where he lived: “Rejected by my father, my mother sought a channel for her misery. She found it in me.” Verbal assaults were accompanied by violent physical beatings. The author took to hiding out in libraries, which became her secret passion. Salvation came in her teenage years from a compassionate social worker who provided the emotional support she needed. Eventually, Sardanis married her first husband, Sotiris, and they moved to Los Angeles. This emotional memoir is constructed as a series of essays, each chapter centered on an event or time period. Conversationally articulate prose is filled with unresolved anger and pain but also expresses the author’s strong attachment to her Greek heritage, especially when it comes to food (with a few recipes capriciously dropped in) and the warmth of the community. According to the author, the trauma of her early years—including sexual molestation by the father she had once adored—left scars that would impact her life for many years. Of Sotiris, she writes: “I’d married someone cruel like my mother and irresponsible like my father.” Not until her third marriage, in her late 40s, would she learn how to trust and love.

A vividly raw portrayal of a brutal upbringing, sprinkled with historical tidbits about Greek immigrant culture.