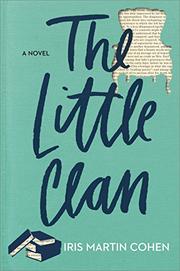 Raised on Edith Wharton and Sherlock Holmes novels, shy Ava Gallanter has found a home as the librarian for the eccentric and dusty Lazarus Club. Nestled amid vintage furniture and books, she's hoping to finally write her own 18th-century novel.

Unfortunately, so far her characters simply stare out of windows and at the floor. Ava realizes she has to make something happen not only for her fictional Agustin and Anastasia, but also for herself. Luckily, her vivacious friend Stephanie returns to town, spies a hidden door in Ava’s library, and the two discover a secret room. Hoping to shake off her Nebraska roots and gain some glamour, Stephanie convinces Ava to renovate the room and open a private literary club. Entranced by the possibilities, Ava eagerly christens the salon The Little Clan, in honor of her beloved Proust, but Stephanie renames it The House of Mirth despite Ava's warnings that the name will bring bad luck. The hidden room turns out to be the perfect place to host parties straight out of The Great Gatsby. Funding is a problem precariously dependent on Stephanie's ability to mesmerize venture capitalists who may someday bring in the necessary funds—and until then, Ava can rack up debt on her very first credit card. Soon enough Ava has fallen for Ben—a talented artist Stephanie convinces to build a beautiful bar for the club but never pays—and the parties arouse the ire of the Lazarus Club’s elderly members. Debut novelist Cohen has concocted a delightful domestic drama: Enigmatic Ben, irrepressible Stephanie, and lots of quirky characters surround Ava, whose mind is a fascinating place to visit as she learns to bring her love for all things literary into a world of shallow readers.

A charming tale sure to delight book lovers.