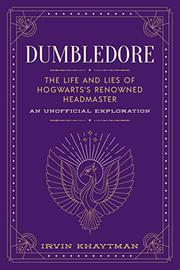 The Life and Lies of Hogwarts's Renowned Headmaster: An Unofficial Exploration

In this edition of a previously self-published collection of essays gathered from his columns on the fan website MuggleNet, Khaytman spins hints in the texts and purely speculative notions together into a broad view of what Hogwarts’ headmaster knew, when he knew it, and what he did about it in his campaign to quash He Who Must Not Be Named. Even though he opens with a key to the jargon, readers who can’t keep SS (Harry Potter and the Sorcerer’s Stone) separate from QA (Quidditch Through the Ages) or easily distinguish Quirrellmort from Cupcrux will struggle to keep up as he minutely analyzes Dumbledore’s influence in events through each of the seven original HPs in turn. Khaytman writes that he reread the series 14 times but freely acknowledges ideas contributed by fellow fan critics both as he goes and, in greater detail, in an annotated bibliography. In the end, though, some of what Dumbledore did—or what he surmises Dumbledore must have done—creates a dilemma for readers, and the author ultimately leaves him, for all his scheming ways and imperfections, on the side of the angels. Dumbledore’s sexuality does not come up nor, aside from a reference drawn from DH to his character’s being “white as his beard,” does his race. Three appendices further explore the canon.

Even readers on their own 14th rereads of the series will find new insights to ponder.