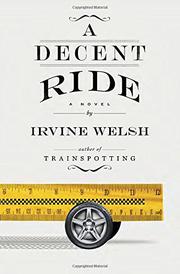 When Ronald Checker hops into the back of Terry “Juice” Lawson’s taxi late one night in Edinburgh, on the eve of Hurricane Bawbag, Terry finds himself entangled in various webs of love, lust, money, and violence.

Checker is an American "punk businessman" complete with reality TV stardom, Southern pedigree, and fanatical, self-serving religious faith. When he hops into the back of Terry’s cab and hires him for the remainder of his stay in the city, Terry’s life begins to stockpile not only criminal plots, but also an onslaught of undesirables one might hope to avoid: his flighty half brother, Jonty MacKay, who works under-the-table painting gigs; his various bastard children; several prostitutes; “The Poof,” a local gang ringleader, and his posse; a Dane with a competing offer on a rare bottle of Scotch; and too many women to count or catalog. Terry manages to deal drugs, placate the man-child millionaire, and shag his way across the entire Midlothian; he attempts to locate a missing call girl, nearly reconnects with his children, and discovers that his heart is no longer healthy enough for sex. His relationships are plenty, complicated, and nuanced. As always, Welsh (The Sex Lives of Siamese Twins, 2015, etc.) takes things from zero to 60 in his latest novel. Chapters alternate between the perspectives of various characters, and many are written entirely in broad Scots, one of Welsh’s trademark stylings. Also true to form are the characters, always gritty and with unrelenting personality. The baggage each character lugs around is heavy, often resulting in various shades of violence such as rape, murder, and arson. Masterfully, Terry develops and stays true to his almost fiendish appetites throughout the novel, all while exploring his complicated family history and romantic endeavors, and still manages to avoid incarceration.

This novel isn’t for the squeamish, prudish, or faint of heart.