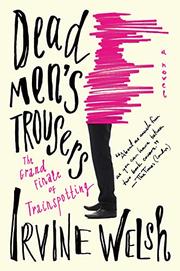 The miscreants from Trainspotting (1993) return, off heroin and more financially stable but still prone to calamity.

The fourth novel in Welsh’s series—following the 2002 sequel Porno and the 2012 prequel Skagboys—thrusts the narrative into 2015 and 2016, with most of the leads pursuing lives beyond junk, beat downs, and petty thievery. Begbie has mined his thuggish Edinburgh past to become a rising star in the LA art world. Renton is a globe-trotting DJ manager. And Simon, aka Sick Boy, is an oversexed owner of an escort service. All are cleaner but not exactly clean, which Welsh plays for comic effect in the early going: Simon sends his brother-in-law on a sex-obsessed midlife crisis after dosing him with MDMA, and Renton is forever chasing down fixes for his demanding clients. Darker circumstances reunite the group as they’re blackmailed into an organ-harvesting scheme that ropes in their old friend Spud, and things get grotesque and absurd quickly: Renton needs to leave a Berlin dance festival and ferry his laptop to an ad hoc operating theater so he can play a YouTube video demonstrating kidney surgery. Welsh’s peculiar talent is finding the comedy in sex, addiction, betrayal, and death, and he handles the job so deftly that the novel nearly qualifies as comfort reading even in gross-out mode. (The steepest hurdle is the prose mimicking the narrators’ thick Scottish burrs, with Spud’s nearly impenetrable: “Ah pure dinnae want tae look up, cause sometimes ye git a radge or a wideo giein ye hassle”). And scenes featuring DMT trips are rendered in graphic-novel form, an inventive touch. Still, Welsh tends toward the gassy, with detours into soccer and a weak subplot involving a cop stalking Begbie. His characters have endearingly messy lives, but the mess is often in the prose, too.

Welsh still overflows with predicaments to thrust his antiheroes into, for better and for worse.