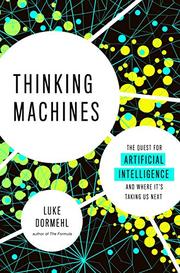 The Quest for Artificial Intelligence—and Where It's Taking Us Next
by Luke Dormehl
BUY NOW FROM
AMAZON
GET WEEKLY BOOK RECOMMENDATIONS:

A history of artificial intelligence and look at the “dazzling (near) future, the changes that lurk just around the corner, and how they will transform our lives forever.”

During the 1960s, AI seemed to be coming “out of cinemas and paperback novels and into reality,” and then the tide receded. Now it’s everywhere, in our iPhones, TVs, cars, and even refrigerators. It’s a marvelous story, and technology journalist Dormehl (The Formula: How Algorithms Solve All Our Problems…and Create More, 2015, etc.) does it justice. After World War II, when computers began calculating thousands and then millions of times faster than a human, enthusiasts predicted talking robots in a few decades. The author dubs this the era of “Good Old-fashioned AI.” Sadly, brute-force calculating enabled a computer to play chess brilliantly, but it couldn’t recognize a face, something every 2-month-old baby does. As Steven Pinker said, “the main lesson of the first thirty-five years of AI research is that the hard problems are easy and the easy problems are hard.” By the 1980s, funding and media interest had shrunk, but younger scientists turned their attention from programming knowledge one piece at a time to systems that imitate the brain. These “neural networks” employ probability, feedback, potentiation, and inhibition to make sense of data. It works. Computers can’t yet think, but they can learn. Google, founded in 1998, was one consequence. The powerful computer named Watson, which easily defeated the best Jeopardy contestants in 2011, succeeded by using analogy and trial and error, not massive stores of facts. This was “deep learning.” Computers now recognize faces and the printed word, translate languages, consult other computers, and gather so much information that they can predict our behavior.

Not everyone approves. Dormehl lets critics have their say but makes a convincing, often disturbing, but always-entertaining case that that we’re in for a wild ride.

RISE OF THE ROBOTS
by Martin Ford
Nonfiction

THE FUTURE OF THE MIND
by Michio Kaku
Nonfiction