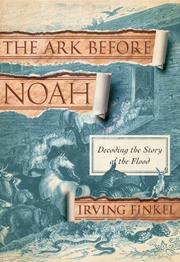 THE ARK BEFORE NOAH

Decoding the Story of the Flood

The ubiquitous tale of the Great Flood was not new to the writers of Genesis. Finkel, the assistant keeper of ancient Mesopotamian script, languages and culture at the British Museum, offers some fresh particulars about the source of the biblical story.

It all goes back to Mesopotamia, the land between the Tigris and Euphrates rivers in present-day Iraq, and the local Sumerian and Akkadian languages recorded in the wedge-shaped cuneiform inscriptions in which the learned author is an expert. Surviving in clay tablets, the story of the calamitous inundation was recounted in epics—e.g., Gilgamesh—eons before Noah. It is likely, Finkel asserts, to have been known to Jewish writers during the Babylonian exile and used in the compilation of the Hebrew Bible. Only recently, the author deciphered a previously unread tablet that turned out to be instructions for building a vessel that would ride out the worldwide flood. His line-by-line exegesis, recounted in professional glee, reveals a huge circular craft—a “coracle,” or basketlike boat, that was still seen during that time in Mesopotamia. The ark, made up of reeds and sticks and waterproofed inside and out with pitch, would have covered about an acre. Finkel’s fresh findings offer much architectural detail about how such a lifesaving craft would be constructed. Self-described “wedge reader” Finkel is a scholarly and often witty guide to the antediluvian civilization and our shared lineage. Some readers may find the great detail so dear to the author’s heart a bit dry, but Finkel’s happy primer on historic Mesopotamia is, on the whole, wonderfully rewarding.

Under the tutelage of a clever scholar, a cuneiform tablet brings to life an ancient world and the genesis of a great biblical story.