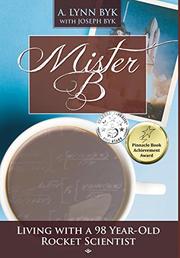 A debut author documents a year spent in her eccentric, brainiac father-in-law’s house.

After a messy legal battle involving zoning laws, a rental house, and potential bankruptcy got in the way of their ideal living situation, Byk and her husband, Paul, decided to move in with his elderly father, the beloved and strange Mr. B. Writing in the style of a journal over the first year living in his home, Byk jotted down notes from almost each day detailing her father-in-law’s “scientific calculations, wry humor and colloquialisms from the Greatest Generation.” At 98, Mr. B had grown up on the East Coast and eventually worked in aerospace engineering. At first, Byk and her husband wondered “how to respond to a rocket scientist,” but Mr. B soon taught the author about zeppelins, pickles, and his tough Polish mother. As she began to drive Mr. B around, opening up his horizons to new foods and experiences, she learned even more about the incredible science he was involved in that changed the entire world. She also found out about the terrible wartime repercussions caused by his work that in some ways still haunt him, like the parts of planes he designed that ended up killing gunners in World War II. Throughout every small story describing a dinner or politically incorrect joke, Byk fully constructs Mr. B, from the Rhode Island coastal awe in his voice to his penchant for mustard on peeled egg—which forces her to “close [her] eyes against a rising shudder.” In these small, perfectly executed moments, Byk brings her fascinating family to life for readers with warm and genuinely funny wit. But no matter how well told these sketches and idiosyncrasies are, they never quite come together to make a larger, more substantial narrative. Although Byk becomes more patient, learns a lot about engineering, and finds newfound respect for the Greatest Generation’s frugalness, these episodes never offer the same emotionally powerful transformation that classics like Tuesdays With Morrie deliver to show the impact one generation can have on another.

A diary-style retelling of one year in a unique family’s life that provides insightful, entertaining anecdotes.