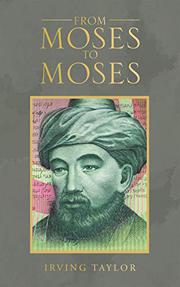 FROM MOSES TO MOSES

A historical novel that chronicles the trials and triumphs of the great Jewish philosopher Moses Maimonides.

Moses ben Maimon, more widely known historically as Moses Maimonides, grows up in Córdoba during Spain’s “golden age,” during which not only prosperity reigns, but also religious tolerance, which permits adherents of the three Abrahamic faiths to live and worship side by side. Still, Jews are considered “dhimmis”—second-class citizens, below Muslims. But after the generally lenient Almoravid rulers are replaced by draconian Almohads, Maimonides and his family face a stark choice: flee, convert, or die. In his debut novel, Taylor (Medicine/Univ. Coll. London) details Maimonides’ lifelong search for a safe environment—one that’s stable enough for him to pursue his monumentally significant intellectual ambitions. Maimonides’ family finally flees Córdoba, and then Spain entirely, and after aborted attempts to settle in Morocco and Palestine, they finally find a home in Egypt. While in Morocco, Maimonides nominally converts to Islam but continues to secretly worship as a Jew—a criminal apostasy that’s punishable by death. The author deftly charts Maimonides’ intellectual development, particularly his attempt to reconcile supernatural elements of the Jewish faith with natural science: “He remained convinced of the importance of the scientific method, of the need for independent observation, and of the requirement to be rational in delivering treatment.” Taylor’s command of the details of Maimonides’ life, as well as the cultural and political features of the historical period, is simply magisterial. His account of his subject’s valiant attempt to preserve the Jewish culture and its ancient repository of biblical teachings is as engaging as it is moving. The prose is unfailingly clear throughout, but it’s more academic than literary in tone, and it reads more like scholarly history than literary fiction. Nevertheless, the author shows Maimonides’ life to be both dramatically thrilling and philosophically important.

A rigorously researched and lucidly presented account of a philosopher’s extraordinary journey.