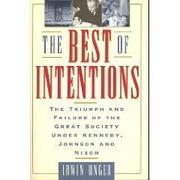 THE BEST OF INTENTIONS

The Triumph and Failure of the Great Society Under Kennedy, Johnson and Nixon

When you next put on a seat belt, visit a national seashore, or switch to NPR, think of the Great Society, says Pulitzer Prizewinning historian Unger (New York Univ.). Unger notes that although the latter-day New Deal begun under the Kennedy administration is best known for sweeping programs of benefit to the poor and disenfranchised, ``there was another Great Society aimed at the educated middle class, or intended for its advantage. Though little noted, this `quality of life' movement may in fact be the one that succeeded best.'' Under the presidencies of Kennedy, Johnson, and Nixon, he writes, an assembled intelligentsia was put to the problems of finding ``answers for America'' and to establishing what Johnson called ``a creative federalism between the National Capital and the leaders of local communities.'' The reform agenda that these thinkers—Schlesinger, Harrington, Shriver, and others—proposed was never wholeheartedly adopted, Unger writes, but it did usher in a ``post-scarcity sensibility,'' the idea that within the vast riches of America lay the possibility of equity for all. Interestingly, in Unger's leisurely analysis, the impetus for much of this reform came not from special-interest groups but from within the federal government itself, leading to an official activism that has not since been matched. Unger points to some unlikely heroes in this campaign, among them the since-discredited legislator Wilbur Mills, who helped make Medicare a reality, and Richard Nixon, who took time during Watergate to sponsor a series of far-reaching environmental and social initiatives, although he had less faith than his predecessors in the power of government to right social wrongs. At a time when the last vestiges of Great Society federalism are under siege in Congress, this well-written study commands particular interest. (Author tour)