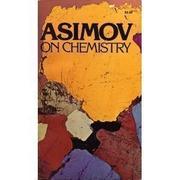 A recycling of Asimov's articles on chemistry originally published in The Magazine of Fantasy and Science Fiction. The essays range from space-fillers (on the similarity of scientific jargon rhythms to Gaelic) to reconstructions of discoveries (oxygen, and the inert gases) that contain the suspense of excitement of a first-class mystery. Asimov is particularly good on the often-neglected but supremely important role of the cultural, social and intellectual milieu which is often the determining factor in shaping raw data (the geometrical-minded Greeks differentiated atoms on the basis of shape; English chemists of the mechanical Newtonian school classified them according to mass), and the importance of incorrect but useful hypotheses (e.g., a substance called "phlogiston" which was thought to be the element of fire) in advancing the path of knowledge. There are also fascinating tidbits on both the great and the obscure researchers, in addition to better explanations of phenomena such as "catalysts," than can be found in most standard chemistry texts.